How Fast Charging Is Important For Portable Devices –

One of the most important parts of having a portable device is the charging experience for it. Yes, it does sound strange, but every portable device has a built-in battery that either requires recharging or replacing after its power has been used up. In this case, we’re talking about smartphones, tablets, and laptops, as these types of devices are ones that require charging the most in our daily lives.

Even though we recharge our tech devices nearly every day, the speed at which they charge at is becoming more important, and that’s because these tech devices are becoming more powerful. Just take a modern smartphone as an example, such as the iPhone XS Max, Samsung Galaxy S10 and the Note 10, all these phones have fast processors, great displays and their cameras take some high-quality photos and videos, too. Along with all that, we’ve got the emergence of 5G data which is a lot faster than 4G, but with it, you get more battery usage on top of what phones already feature.

Now, the use of new battery tech is a bit off, and that’s because it’s not quite ready for the consumer market. The solution to having these powerhouse portable devices is to use higher capacity batteries, and that’s exactly what’s happening. Most Android smartphones are now using nearly 4,000mAh battery capacities to meet with the rising powering demands. That said, with a larger battery the use of fast charging technology becomes a necessity.

In this article, we’re going to be going over two of the main fast charging methods that are used, which are Quick Charge and Power Delivery. One of these fast charging ways is a lot more helpful than the other. Let’s take a closer look at each one.

QC is one of the most used fast charging technologies for most Android smartphones. You can find many Quick Charge power banks on sites like amazon, which you can use to fast charge your phone, too. The reason for that is because the charging tech was created by Qualcomm, which is also the creator of the processors that go into nearly every Android smartphone out there. That’s where the limiting factor is, which would be that a device has to use a Qualcomm processor for it to fast charge using Quick Charge. This is why USB-C Power Delivery charging is becoming more popular.

So the first thing to know is that USB-C is a new standard that’s used for connectivity and also for charging. When we say “standard” this is a standard and that’s because the port is being with all Android smartphones currently and has been used for quite a few years now. Micro-USB is a thing of the past. You’ll also find that some headphones, keyboards, and mouses may now use a Type-C port.

Many smartphones that use a USB-C port are Power Delivery compatible, if you’ve got an 18W PD charger, then you can fast-charge your smartphone. Another part of PD charging that is innovative is that the iPhone is compatible with it. From the iPhone 8, and iPhone X, to the current models, you can use a Lightning to USB-C charging cable to fast charge your iPhone.

The implementation of Power Delivery holds the same idea for smartphones, and that’s because you can potentially use the same charger that you would use to fast charge your phone to also charge a  laptop. That said, not all Power Delivery chargers with an 18W charging rate can charge PD compatible laptops.

Two other reasons that PD charging is the future of charging is because of its use of Gallium Nitride chips and also its ability to do Dynamic charging.

So most chargers make use of silicone components and that can tend to make a charger larger if it makes use of more charging power. With the usage of GaN, a single chip can do the work of many components. What you’re left with is a powerful charger that has a very small form factor. So with chargers that use GaN, you can have a 60W Power Delivery charger that fits into your pocket that can charge your phone and laptop. 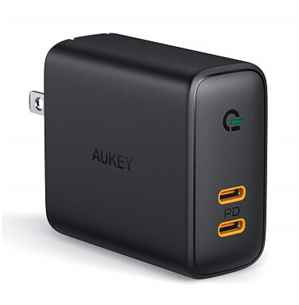 Then there’s the Dynamic charging part, which is exactly what it sounds like because the ports on PD Dynamic chargers can change their charging power. This is done by changing the number of devices that are charging. If you’ve got a 2-port Power Delivery charger, and two devices are charging, two of the ports may output 30W each. This is some great power as you can potentially charge two MacBooks at the same time at pretty fast charging speed.

At the same time, you could also just use a single Power Delivery port, and the charging speed can go up to 60W of charging power.